There will be a Mid-Lent Holy Qurbana on Tuesday, March 26th at 6:30pm. Please make every effort to attend this Special Service.

This is the day we erect the Golgotha in the middle of the church. There are several significances to the erection of Golgotha.

The Bible Reading says: "And as Moses lifted up the serpent in the wilderness, even so must the Son of Man be lifted up, that whoever believes in Him should not perish but have eternal life." John 3: 14-15. Jesus predicted his eventual crucifixion to his disciples in this verse.
Moses lifted up the bronze serpent in the middle of the desert (wilderness) around the middle of the Exodus, the journey of the Israelites from slavery to their promised land. He lifted up the serpent so that those who are bitten by the snake might look at it and have life. Similarly the cross (Jesus) is lifted up in the middle of the church so that we are reminded that those who are bitten by sin can look at Jesus and gain eternal life by the Him. 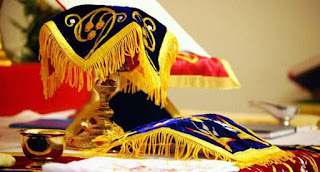 Holy Qurbana will be celebrated on Saturday morning at 8am.  Please join with your family.

Please click the link below to view the daily scripture readings for week 2.

Please click the link below to view the daily scripture readings for week 1.

Please click the link below to see the full schedule for 2019 Great Lent.  Details include evening prayers and all Holy Qurbana scheduled during this period.