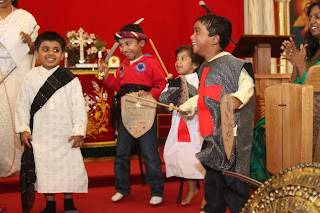 The Sunday School had a General Assembly on Sunday, April 21st after the Holy Qurbana.  All the even classes made presentations consisting of skits, speeches and songs.  All our children were awesome!  They displayed their talents in many ways and entertained all in attendance.  The teachers were amazing helping the students prepare and present what they learned in their classes in a very short time.  It was great to see our children grow and be able to share their knowledge with others.  Congratulations to all the students, teachers and parents!

Please see the pictures from the event.

Geevarghese Mar Ivanios, Kottayam Diocese Metropolitan of the Orthodox Church, passed away on Friday at 7.30 am Indian time. He was 72 and was undergoing treatment at a private hospital here for old age ailments.

Geevarghese Mar Ivanios became the Metropolitan in 1991.  He was a teacher in the Theological Seminary from 1971.  He has authored a book, “Hridaya Sudhikaranam”.  His Grace is also a known guru in meditation!

A General Body Meeting has been scheduled for Sunday, April 14th after the Holy Qurbana.  All eligible members should make every effort to attend and provide input to the church decisions.  If you have any questions, please contact Mr. K.M. Mathew, Secretary.