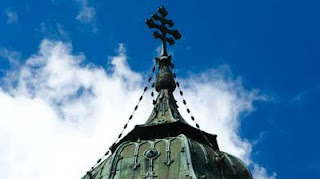 Holy Cross is the means of salvation that drives away all evil spirits because the Lord carried it upon His shoulders to Mount Calvary during His ultimate fight with evil. There beyond He ornamented it with His very own human body. Holy Cross is the symbol of peace and the flag of victory. It is in the Holy Cross that our glory confides. It is the fortress for all, who take their refuge in, including churches and monasteries. That is why we all ornament ourselves with a Holy Cross, mostly gold though!
Let us sing once again with optimistic and positive trust in the symbol of peace, the Holy Cross that ‘sleeba pallikal dayaraakal kkellaamaakatte kotta’!